Recently, Memphis Jones appeared as Collingwood Elvis Festival's VIP and this impromptu moment happened during the Grand Champion event on Sunday night where Memphis sings a portion of American Trilogy:

Thank you, Collingwood, Ontario for embracing Memphis and his special brand of Elvis fanaticism. He is a fan of Elvis fans as well as a huge fan of Canada! The feeling seems to be mutual as Memphis gained a few new fans of his own.


During the 2015 Collingwood Elvis Festival, Memphis performed Memphis and Friends against the backdrop of the beautiful Blue Mountains in Ontario, entertaining the largest audience in the history of the festival! Approximately 7,000 people gathered to see him perform his Memphis music review, produced by EPC Management & Entertainment (Thank you, Elena!)

Earlier this year, he was invited to be a part of the inaugural Fredericton King Fest in New Brunswick and is looking forward to engaging with more Canadian fans of the music that originated in his hometown, Memphis, Tennessee and the Mississippi Delta in 2016.

It may be fans can look forward to more moments like THIS ONE. 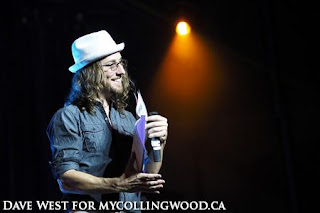 A new trilogy, Collingwood-style, is one that fans of the music that started it all won't soon forget! See a gallery of fan photos from 2015 Collingwood Elvis Festival HERE.

You can see Memphis perform weekly on world famous Beale Street.
Keep up with him and all things Elvis as the online host of Elvis Week in Memphis.

Book Memphis Jones directly!
Give him a date, he'll give you a rate!