Memphis Jones at Fairpark in Tupelo

Memphis Jones will be performing on the Fairpark Stage in Tupelo, MS along with Paul Thorn this week during the 17th Annual Tupelo Elvis Festival. 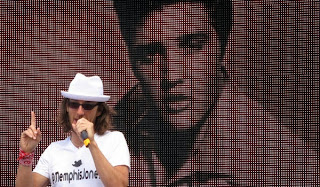 Fairpark is the site of Elvis' homecoming concerts in 1956 and 1957. Proceeds from these concerts were used to buy and restore his birthplace as well as build a youth center. Memphis tells you all about it as a stop on the Tupelo Driving Tour:


With his "Twitter hijack" on @MyTupelo, Memphis has helped to nearly quadruple their following since signing on. In 2013, he was also honored to participate in the unveiling ceremony of an Elvis Presley marker alongside Mayor Jack Reed, Jr.


Fresh from filming for K-Love TV in Nashville, Memphis' nonstop travel schedule this summer is keeping him busy with appearances that include Canada's Collingwood Elvis Festival with plenty of public and private performances of his Memphis Music Review in-between at select stages on Beale Street in Memphis, TN and across the south.

If you are looking for him in Memphis this summer, you can check here for an updated public performance schedule at both Hard Rock Cafe and BB King's Blues Club.

See here to learn more about Memphis' work with the Memphis CVB.
You can book a private tour with Memphis during your visit by contacting him here.