Elvis Week 2014 was a huge success and what a blast! If you've never experienced Elvis Week in Memphis, make plans for next year to see what everyone is talking about!
Here are some highlights from the week:

Your Elvis Week 2014 online host, Memphis Jones, welcomes fans from around the world:

A highlight for many Memphis visitors is the Backbeat Tours' unique adventure through Memphis' musical heritage, especially during Elvis Week:

MJ tries not to take himself too seriously:

Memphis interviews Elvis insiders, Wiggles founder Greg Page and some talented A cappella up and comers:

With much anticipation, Elvis Week 2014 included a ground-breaking ceremony for the new Guest House at Graceland.

A highlight of any Elvis festival is following the careers of the Elvis Tribute Artists. Memphis Jones and the 2014 Ultimate Winner Jay Dupuis have more in common than an appreciation for the music of Elvis. Memphis was honored to have the opportunity to water baptize Jay during Tupelo Elvis Festival in June! 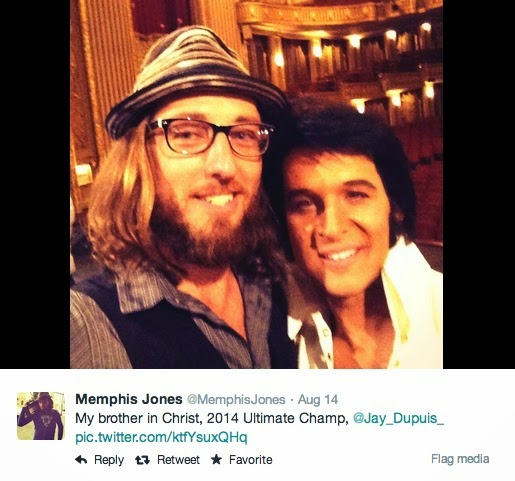 "There are only 2 kinds of people in the world. Those who are fans of Elvis and those who don't know it yet."
-MJ
Memphis Jones gives you an inside look at new interactive iPad tour at Graceland:

See you at Elvis Week 2015, Elvis fans and future fans!

Book Memphis for tours, music or personality work here.
Give him a date, he'll give you a rate!

Posted by Memphis Jones at 9:59 PM